The Cultural Heritage of El Hierro

The island of El Hierro and its people. A synergy that gives rise to a culture rich in traditions, folklore and celebrations that you should experience first-hand.
History and the passage of time have defined the identity of El Hierro, leaving an ancient culture heritage that has been passed down from generation to generation right up to modern day.

Many traditions are based on the relationship the people of El Hierro have with nature. Los Carneros de Tigaday (La Frontera)—a tradition that has been declared of Cultural Interest—is one of the most peculiar on El Hierro and takes place during carnival. The continuance of this tradition is thanks to Benito Padrón, a citizen who made sure to teach it to the youngest islanders after the civil war. They stroll through the town, wearing sheepskins, scaring people and covering them in shoe polish.

Contrasts characterise El Hierro, both on a scenic and a cultural level. In one single place, you can experience peace and calm that is suddenly interrupted by festivities and traditions such as the Bajada de la Virgen de los Reyes (Descent of the Virgin of Kings), the island's most important festivity. It has been held every four years since 1741, when there was a great drought, and it involves carrying a statue of the island's patron saint from the shrine in La Dehesa to Valverde. Other towns and villages such as El Pinar, Valverde and La Restinga also hold dances and evening events in summer.

Another factor that defines the island is its craftsmanship, especially in the areas of El Pinar and Sabinosa. An art but also a necessity for the people of El Hierro.

Living on an island meant that they created and developed tools for domestic use. Tools for their everyday activities created from wood, clay, willow and other materials taken from nature. They also started to work on instruments and typical clothing that they used and wore for island festivities and traditions.
Austere, manual professions that continue today. Weaving – because of their rural origins, pottery, carpentry and basketwork.

Many artisans continue working on the island, still using traditional methods to ensure that they are not lost.

Apart from the sports you can do out in the island's nature, there are also some sports that are native to the Canary Islands archipelago.

Canarian wrestling is a sport that has descended from the original island natives. The aim is, in short, to put your opponent off balance in a body-to-body struggle.
In a more rural setting, shepherds do the salto del pastor (shepherd's leap), a practice adopted by the natives for quickly crossing uneven terrain with the aid of a long pole.

The past of El Hierro is more alive than ever: you just have to come and see it. 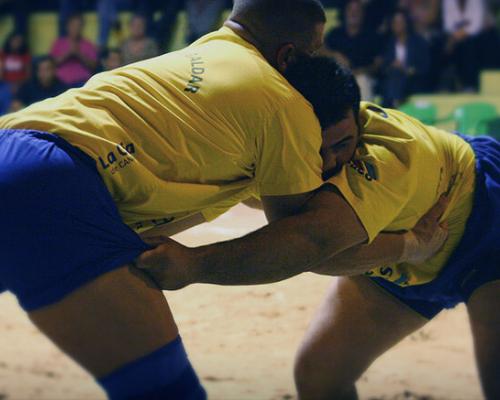